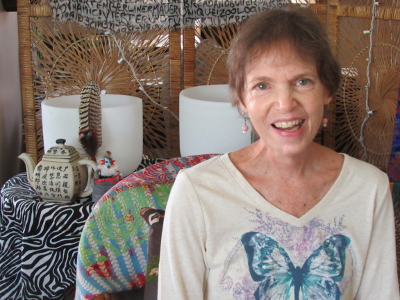 Jacquelin is a leader in the field of telepathic communication with animals. She communicates internationally with thousands of individuals about their animal companions. Jacquelin has experienced great love and respect for all life forms since early childhood. Since 1972 she has been actively involved in studying animal life and behavior. After receiving a B.A., Jacquelin worked as a licensed animal technician and dog trainer. She is gifted at acknowledging and supporting both person and their animal friend during a consultation.

In 1979, Jacquelin was standing at an exhibit at a zoo. She asked a zebra to come and stand in front of her. Within a minute, the zebra walked over from the far side of the exhibit and stood in front of Jacquelin. Then she heard the zebra ask, “What do you want?” Jacquelin was off and running into communicating with animals after this experience. “The animals taught me how to communicate with them.”

“I’ve been communicating with animals and nature my entire life, but my talents went underground for a number of years after being told that animals and trees don’t talk. The animals taught me how to teach other humans how to listen to what they have to share.”

Animal communication comes naturally for Jacquelin, and she loves teaching others how to communicate with their animal companions. She is a gifted teacher and people leave her workshops having experienced communication with animals.

Jacquelin Smith, B.A., Certified Hypnotherapist, as well as a gifted Psychic, Healer, and Metaphysical teacher is an Experiencer/Hybrid.

Since early childhood, Jacquelin has had numerous experiences as well as telepathic communications with star beings, light beings, angels and interdimensional beings. Jacquelin is able to travel, through her consciousness, to other star systems and universes and remembers what she is shown. Also, she has experienced an NDE as well as many “direct experiences in the light.” See: Light Language/Star Reading.

Jacquelin spent many nights on starships throughout her childhood learning many skills, including telepathy, clairvoyance, clairaudience and clairsentience. She’s been a star being many times in other star systems. Her star family in this current life who are Tall White Zeta Hybrids. They injected a DNA cocktail mix, which included their DNA as well as seven other races. This genetically enhanced Jacquelin before she was born. This makes her a hybrid, and she carries Star Being frequencies and DNA.

At fourteen years old, she was standing her in backyard and a silver disc was hovering over her backyard in the middle of the day. She stood and watched as the disc formed right angles for about 30 seconds, and then shot straight up into the sky and disappeared.

Also, she has over forty hybrid children and still communicates with them. She has met and communicated with over eighty different star being cultures.

Jacquelin receives symbols and messages from the star beings. Also, she speaks various light languages of Star Beings. She has been speaking light language since she was eighteen years old. She offers Star Origin readings for people as well as light language/symbol activations, which assist others in expanding their consciousness.

On Thanksgiving of 2013, Jacquelin was telepathically contacted by a Council of Star Beings. She looked out the window and saw a cross in the sky. Jacquelin went outside and watched seven starships dance in the sky. Then a craft emerged from a portal above her house, flew directly over her and the lights from the craft flashed into her eyes. For fourteen days, she traveled in and out of multiple dimensions. She experienced being taken into past and future timelines as well as various OBE’s, multiple-locating, and physically being on a Mothership with many star beings.

With these many experiences, healing took place in her mind, emotions, body, and soul. These experiences allowed her to understand her life story.

Barbara Lamb gave a presentation at the 2016 International UFO Congress on Hybrids. Jacquelin was one of the hybrids to be included and who gave a talk with this presentation. She has written two books, Animal Communication and Star Origins and Wisdom of Animals. She was interviewed by Barbara Lamb, M.S., MFT, CHT, and Miguel Mendonca, a researcher, for the book, Meet The Hybrids. One of the chapters is about some of Jacquelin’s life experiences.